A specter is haunting Washington, an unnerving vision of a Sino-Russian alliance wedded to an expansive symbiosis of trade and commerce across much of the Eurasian land mass - at the expense of the United States.

And no wonder Washington is anxious. That alliance is already a done deal in a variety of ways: through the BRICS group of emerging powers (Brazil, Russia, India, China, and South Africa); at the Shanghai Cooperation Organization, the Asian counterweight to the North Atlantic Treaty Organization; inside the Group of 20; and via the 120-member-nation Non-Aligned Movement (NAM).

American military circles are recommending a re-organization of all nations in the Middle East along ethnic lines. Loss of territory and drawing new borders will effect Turkey, Syria, Lebanon, Saudi Arabia, Iraq, Iran and Pakistan among others. Through the complete dissolution of states, new actors will be created in international law, along the lines of ethnic and religious affiliation. According to this plan, a country, by the name of "Free Kurdistan" will be created, three times the size of Syria, from territory taken from today's northern Iraq and eastern Turkey. The remainder of Iraq will be divided, the capital, Baghdad, smashed. Iran would lose extensive areas of its coast, as well as, territory bordering on Pakistan, where a "Free Baluchistan" is to be founded. Mekka and Medina, until now located in Saudi Arabia, will be promoted to capitals of an "Islamic Sacred State," that will extend to the southern borders of Jordan - doubling the surface of the Hashemite territory ("Greater Jordan"). This ethnic re-organization is depicted on several US maps, that the historian Dr. Pierre Hillard (Paris) has now published in France. In his talk with german-foreign-policy.com Hillard deems that "German policy plays an important role in propagating these ideas". German-foreign-policy.com publishes, for the first time in Germany, the US cartography. 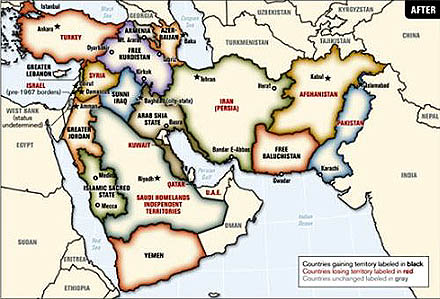