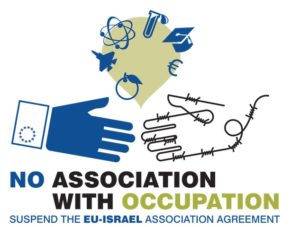 A European Call to suspend
the EU-Israel-Association Agreement

We strongly condemn Israel’s latest massacre of Palestinians in the besieged Gaza Strip. More than 2,160 Palestinians were killed, more than 10,800 were injured and more than 500,000 people were displaced. The UN and other international bodies accuse Israel of deliberately targeting civilians and civilian infrastructure including schools and hospitals, as well as other war crimes.
In the words of the top UN official for Palestinian refugees Pierre Krähenbühl, « Children killed in their sleep; this is an affront to all of us, a source of universal shame. Today the world stands disgraced. »
Yet Israel’s violations of international law did not start with its most recent attack on Gaza. For decades, Israel has been denying the Palestinian right to self-determination by deliberately siezing territory and resources by force, forcibly transferring Palestinians from their land, systematically discriminating against Palestinians and brutally repressing those who seek to oppose its occupation and violations of human rights. Immediately following the end of the Gaza massacre, Israel announced the confiscation of another 1000 acres of Palestinian land in the Bethlehem region of the occupied Palestinian West Bank, in order to expand its illegal settlements. The UN, the EU and other bodies all accuse Israel of violations of international law during the course of its occupation of Palestinian territory.
Through the continued existence of the EU-Israel Association Agreement and the strengthening of the bilateral relations, the European Union and its member states are sending Israel the message that it does not have to abide by international law. The EU is contributing to the climate of impunity and lack of accountability. By continuing to award Israel preferential access to European markets and access to EU programs and funding despite its persistent violations of international law, the EU is providing material support to Israel’s violations of international law and failing to uphold its own commitments under international law.
As organisations who reject all forms of discrimination, including anti-semitism and Islamophobia, and as supporters of the right of all people to live in freedom and with dignity, we call on the European Union to suspend its Association Agreement with Israel until it complies with international law and on people across Europe to join us in doing so.
[ Signatur-Organisationen ] [ PDF ]

Rabbis: A Passover message to our Presbyterian friends
A Passover message from members of the JVP Rabbinical Council about realities for Jerusalemites, and HP's role in limiting freedom of movement for Palestinians.